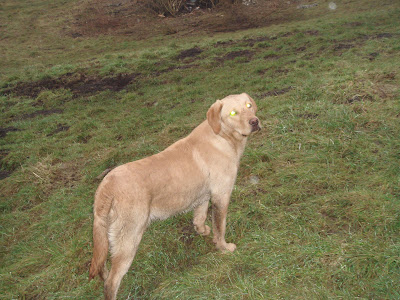 We had our fingers crossed yesterday as Rollo- COPPERBIRCH WINNEBEGO - went to have his eyes tested for the first time.His eyes are brown but the camera just caught him wrong on this photo thats why they look a funny colour. We use Stuart Ellis who travels to Castle Vets at Barnard Castle. The waiting room was pretty full as There had been a fall of snow which meant the A66 was closed so Stuart had to detour by Newcastle. Anna went to the shops and I had some very good fish and chips at Fryer Tucks fish shop just down the road from the surgery.There was a 2 hour delay but Rollo didn't let the Cuckavalda Gundogs down as he sat there patiently surrounded by other unruly dogs and a few whining cats. He took it all in his stride- showing first class signs of being a peg dog. His sire is FTCH Greenbriar Viper of Drakeshead and his dam is FTCH Ernvale Maud of Tudorcourt who was the top bitch in Ireland in 2008 bred by Keith Matthews. He is turning into a fine dog. I think he was quite happy to get home and out into the field.He was born at the end of July 2009
Posted by Cuckavalda Gundogs at 01:33 No comments:

Away up to Billy Steels... 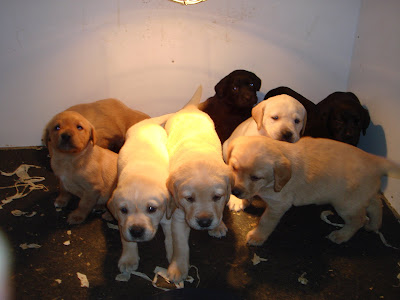 It was up to Billy Steel snr yesterday morning to line Willow- who's sire is FTCH Talisbrook Rhum of Bolton Abbey with Billys FTCH Leadburn Viceroy. Thanks to Catherine as always for her kind hospitality.They had a full house what with us and someone who had gone to buy some pups from Kent. We arranged to meet Gary Wood from Fraserburgh to hand over one of our pups. Billy and Gary sometimes judge at the Labrador trials together. So as they say in Scotland there was a lot of blether going on. Here you see some of Mays pups who were born on the 20th Jan. Two of these are going to America.
Posted by Cuckavalda Gundogs at 01:57 No comments: 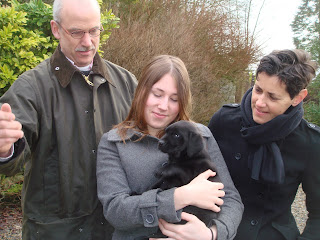 I will remember today -not as Anna would have liked as it for being St Valentines Day but today was when we had our first Cuckavalda puppy go abroad into Europe. With all papers,passport and inoculation the Smeltink family came over from Wervershoof in the Netherlands to pick up their puppy. Frank already has 2 Labradors and has done trialling in the past but as one is getting on in years he is looking for a new pup to train on. He has been busy establishing his stables www.haflinger-horse.net and now is hoping to be able to set some time aside to spend with his Labradors.Here you see the fam de Smeltink getting ready to leave with Cuckavalda Frank's Scarlet. They are travelling via the Eurotunnel.
Posted by Cuckavalda Gundogs at 11:43 No comments: 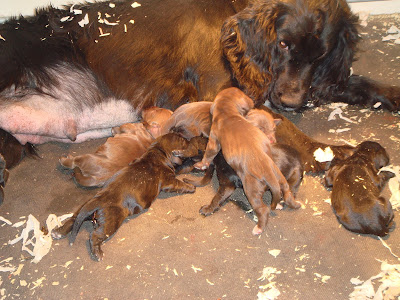 At least it was not the middle of the night .Daisy. a black cocker started pupping around 9am and by 11am she had only had one so it was off to the Skeldale Vets in Thirsk for Daisy to have a Caesarian. Fortunately the vets were just finishing morning surgery and after Peter took a quick look at Daisy he scooped her up in his arms and off he went with her. Usually a Caesar takes about 30 minutes but after 2 hours pacing up and down. Ellen finally handed over 7 more noisy not so little puppies. They had taken so long as two of them were not as lively as they wanted to make sure they were surviving before leaving. Daisy was none the worse for her ordeal and took to motherhood like a duck to water. This is her first litter and here you can see her 6 hours and a chicken supper late. The sire Simon Tyers bred Timsgarry Jenson by the famous FTCH Sanford Black Mamba. and Daisy were actually born on the same day on 2nd June 2007. Daisy official name is Cuckavalda Daisy Roots ,she was the first cocker pup we bred and was so named as she has white tips to her toes.Her mother was Penny -Parkbreck McCloomes and sire Chyknell Sourcerer by FTCH Chyknell Gold Star.
Posted by Cuckavalda Gundogs at 14:33 No comments:

The shooting season is finally over..... 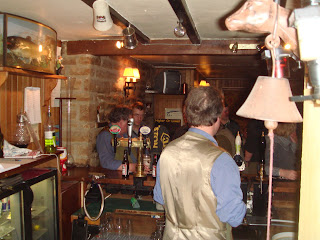 Now the dogs can start their official holidays and havent they earned it . It has been a long and hard season for them with the heavy snow and large bags of partridge and pheasants. Little Peg who carries a pheasant nearly as big as herself has developed muscles like Tyson.Even Quozzi was curled up asleep in some bracken today keeping out of the wind. She goes every day as she is frightened she misses something but even for her it is time for a rest. This last few weeks has been testing for both man and dog.
Many thanks to Mark and Rob for the last 2 days shooting at Newburgh.With bags of around 300 each day and perfect conditions even if it was a bit on the cold side. Their generosity continued tonight when pickers up and beaters were invited to the Fauconberg Arms in Coxwold for a party. The bar was full and no doubt a lot of tales are being told. The more ale that is being consumed the taller the stories get.Even Phil admitted he was ready for his bed.As the rest party on I have come home and now on my way to bed. Only .....days to next season.
Posted by Cuckavalda Gundogs at 13:40 No comments: