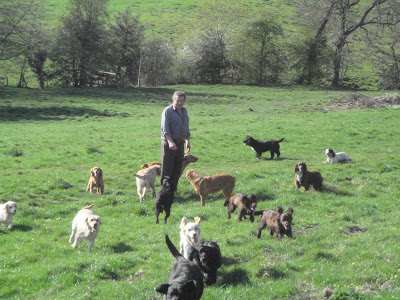 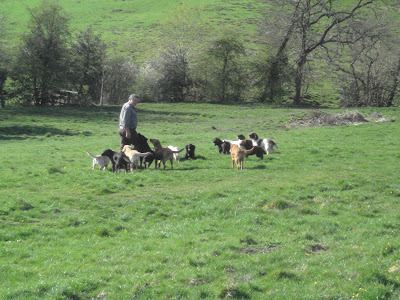 ..it was me .Jack was out with his dogs when I came back from shopping yesterday and there they all were enjoying the sunshine and keeping close together in case they missed out. they made a nice photo . I got out of the car and shouted to them. Although I don't have much to do with the every day running of them. What I find is though if I have them out all together it is quite a handful . I have them sussed though and always reward them with food when I get them back to their kennels and so talk about cupboard love. so they quite like to see me and here they are all coming over to say hello
Posted by Cuckavalda Gundogs at 13:10 No comments: 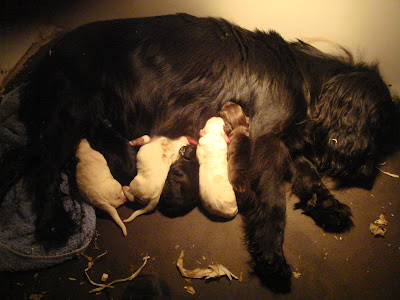 Peg is one of our little black cocker spaniels who is a right little character.When she is showing happy she "grins" and shows her teeth. She doesn't weight much more than a good sized cat but is quite capable of carrying pheasant and build up her neck muscles during the season . Tyson would be proud of muscles like that. She has been picking up since she was about 10 months old. She is quite capable of climbing too. She is one of those with a huge personality and everyone who she comes in contact with cant help but take to her. The sire of the pups is George our lemon roan stud dog . There are 6 males and 2 females- black,brown and lemon and white with one at the moment snow white We have never had one all white before. She started as we were going to be bed so it made it a long night .She had her 8th at around 6am. Bitches often don't eat for a couple of days before they pup and hid their food. Anna had decided about 3am to get something to eat to pass the time. Peg had looked at her as if to say cant I have some too and so they shared cheese and olives.
Posted by Cuckavalda Gundogs at 13:30 No comments: