Just to say thank you to everyone who has sent their good wishes while Jack has been in hospital recently.

The doctor at Malton Hospital out of hours was brilliant .He rushed Jack straight through to Ward 24 at York Hospital.  However poorly he stubbornly refused to get in a wheel chair and looked like one very drunk person with a water bottle in his had swigging it as he went along . He was burning up and at this stage didn't realise when was actually as ill as what he was. He was dis- oriented and was falling over as the poison spread all over his body.

He was persuaded by some very pretty nurses to stay the night ..thank goodness for their patience .He moaned it was too hot and he wouldn't be able to sleep and would come back the next day. If he had come home, he would not have been here now. As it was, he was on oxygen, had to have a fan to regulate his temperature and 3 drips in this arm.

He had sepsis and had IV drips of doses of what the doctor could only describe as like Domestos blasting his system.  There has been umpteen  blood tests to find the cause  which the results are still coming back negative. The doctors seemed quite excited that they had a patient who to date they cant find the cause and is still breathing . Not just breathing but is at home now after 8 days in hospital . Of course he has a long way to go and soon tires but is planning to be out and about working his dogs next week.

It has been a week of many challenges and one of those was Jack having to wear pyjamas . Makes training a young dog child's play. 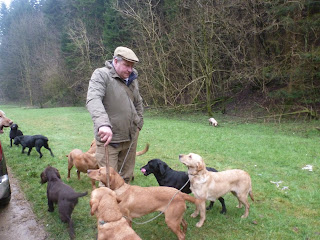