Brendan Kelly and his black Labradors 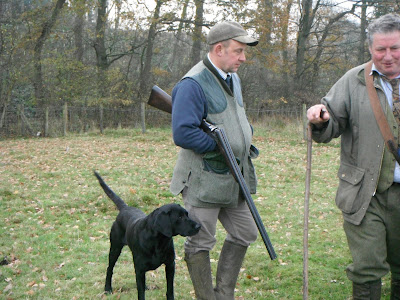 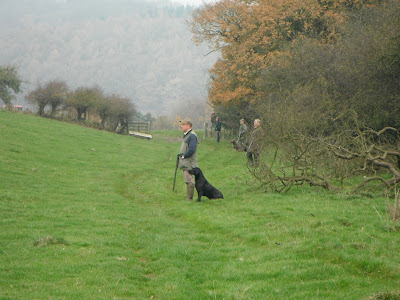 We had the pleasure of Brendan Kelly with us today on a shoot. Brendan with his black Labradors. So when he changed over at lunchtime with yet another perfectly behaved black dog Anna didn't realise it was a different one to what he had out in the morning. To think Brendan hadn't picked up a gun for a long time he had some excellent shoots and didn't let his dogs down. It was nice to see the 10 month old dog that we had sold him. In the last 4 months he has certainly grown into a big handsome dog.He is by FTCH Leadburn Viceroy.
Posted by Cuckavalda Gundogs at 14:03 No comments: 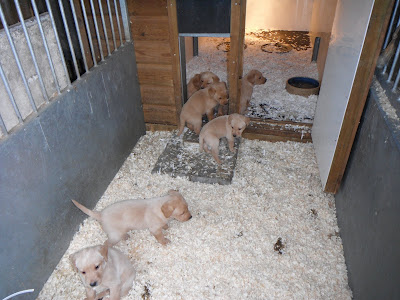 Not into taking too many photos of the pups.The flash makes them look a lot lighter than what they are . In fact we have never had such a dark fox red litter Here you see our month old fox red Labrador pups starting to explore. They are eating like good ones now and Jack is thinking it is time they were going out a bit more.At the weekend he will start to walk them out. By the time these pups are ready for going they will be walked about 200 yards down the road 3-4 times a day. We have a radio in with them I don't think they have a favourite tune but it gets them ready for when they go to their new homes and the big wide world.
Posted by Cuckavalda Gundogs at 13:54 No comments:

We are absolutely delighted.... 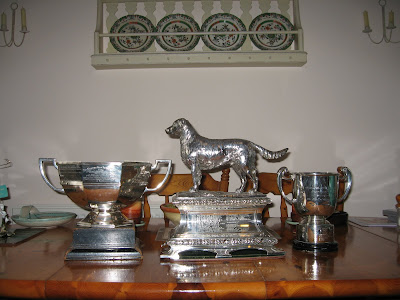 for Billy and Catherine Steel from Leadburn Kennels on Billy achievement today.Early this afternoon we heard that Billy Steel snr had made his young fox red dog Copperbirch Paddy of Leadburn into a FTCH. It was at the Tay Valley 2 day event in which there were still 12 dogs in on the second day. Now for us mere mortals if we could ever get one dog to be a FTCH that would be a dream come true. Now this man can be called no less than a legend as he has made up an unbelievable 10 FTCHs now.This is sheer dedication not only from himself but from dear Catherine his wife who keeps the rest of the dogs in top form at home when he is away trialing.After the fireworks have died down and the celebrations have finished we hope they sleep well in their beds tonight. Paddy has actually qualified for the IGLs twice. Anna asked if he qualified twice -can he run twice but it doesn't work like that. These are to be held on the 5, 6, 7, Dec on the Nevill Holt Estate in Leics by kind permission of D. Ross Esq. So lets hope Catherine has a bit more silver to polish. The trophies here are from when Paddy qualified the first time . Copperbirch Paddy of Leadburn stands at stud at Leadburn Kennels in Leadhills ,Lanarkshire.-www.leadburngundogs.com.
Posted by Cuckavalda Gundogs at 14:31 No comments: